Whisky Talisker Skye
Talisker Distillery
700ml
Code: 1130430
44,40€
Talisker Skye is the distillery¢s ode to these appealing contrasts, with a smoky sweetness, maritime notes and a spicy edge.
Product description
The Isle of Skye is renowned for its rich, varied landscape – from its soft, serene shores to the dark, jagged peaks of the Cuillin mountains.
Appearance: Bright 18 carat gold with polished copper lights.
Nose: The first glorious citrus sweetness of fresh oranges develops into soft mango. Maritime air with seaweed, driftwood and salt continue under.
Body: Medium bodied and softly textured.
Palate: Soft and sweet at first, coating and tongue tingling, with light smoke. Quickly becomes more pungent and savoury with a hot spiciness.
Finish: Drier and of medium-length, with a lasting, smooth aftertaste, in which light peaty burnt embers can be found.
Im ready to buy
1 Unit >
44,40€
1 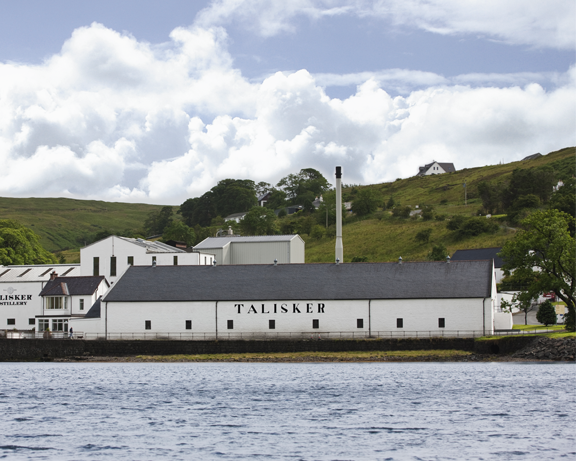 In 1825, Hugh MacAskill of Eigg acquired Talisker House and the north end of the Minginish peninsula on the rugged, beautiful Isle of Skye

Five years later, he and his brother had built what was to become one of the world’s most popular distilleries on the shore of Loch Harport. In fact, by as early as 1898, Talisker was one of the best selling malt whiskies in the UK.

Through fire, war and financial crises, this northern outpost – Skye’s only distillery – has remained strong: producing consistently fine whiskies which, once tried, are rarely forgotten.

Exuberant, wild and free, with one foot on the land, one in the sea

Like the view of the sea from our distillery doors, this whisky is complex, and takes a while for your palate to appreciate some of the more salty, peaty notes. Each expression has its own forthright personality, offering something distinct from the rest, and yet they all belong to the same breed – whisky for the adventurer, those happiest close to nature.

Intense and powerful, the Talisker family all have a peated, smoky flavour. This flavour comes from the peat burned during the malting process, and carries on it the salted smoke of an island battered by wind and waves. Beneath the smoke you’ll find soft fruits and cereal notes, and in the older expressions a rich vanilla imbued by the aging process.