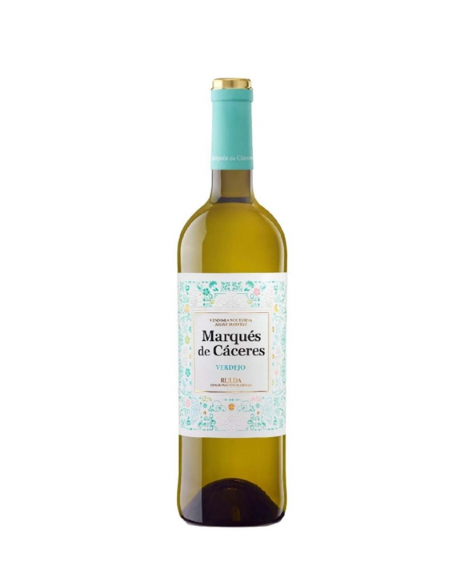 Verdejo Rueda, Marques De Caceres
Marques de Caceres
750ml
Code: 45458
8,49€
The exuberant Verdejo from the vineyards of Marques de Caceres in central Spain will take you on a journey with its tropical aromas!
Product description
Vineyard: Rueda.
Vinification: Following collection during the night in perfect condition, the grapes are chilled before the must is selected using a gentle pressing process. Fermentation takes place on the finest lees at controlled temperature of 15-17°C. Afterwards, the wine is kept on its finest lees until just before stabilisation and bottling.
Tasting notes: Bright, greenish straw color. The nose reveals its floral, mineral character with notes of citrus (grapefruit). The Verdejo from our own vineyards is gradually attracting followers and achieving recognition for its excellent quality.
Serve at: 6-8°C.
Ageing potential: Drink it fresh
Im ready to buy
1 Unit >
8,49€
1
12 Units >
93,72€
101,88€

More than four decades with a single obsession: quality

In 1970, Enrique Forner founded Marqués de Cáceres, Unión Vitivinícola, S.A., a historic Alliance between a region (Cenicero, La Rioja Alta), an enterprising family that has been devoted to the wine trade for five generations, the best vine growers and vineyards in La Rioja and a Bordeaux concept which revolutionised the production and business model with a single objective: the quality to obtain the best wines, an obsession that today continues to be the leitmotif of Cristina Forner, the fifth generation of this distinguished wine family

At least five generations linked to wine forged the family spirit of Marqués de Cáceres. Enrique Forner, who founded the winery in 1970, learnt the wine trade from his father, who in turn had learnt from his father and grandfather (‘Wine producer Forner’), interrupted in Spain by a period of exile during the Civil War. Cristina Forner, his daughter, key to the internationalisation of Marqués de Cáceres, manages the winery with the pride and experience of one of the great Spanish families for which high-quality wine has never known boundaries, Marqués de Cáceres wines being present in over 130 countries.

A deep conviction in the ideas assimilated by Enrique Forner in France and transferred to La Rioja from 1970 onwards, means that they continue to be the pillars on which Cristina Forner rests Marqués de Cáceres. A spirit based on the production of high-quality wines, that is continually evolving with an established policy of investing in technology and innovation, but indifferent to the passing fashions which distort winemaking from time to time and lose sight of the fundamental objective of this business: offering the consumer a wine that they can enjoy and share with their friends and loved ones, as seamlessly and consistently as the history of Marqués de Cáceres.