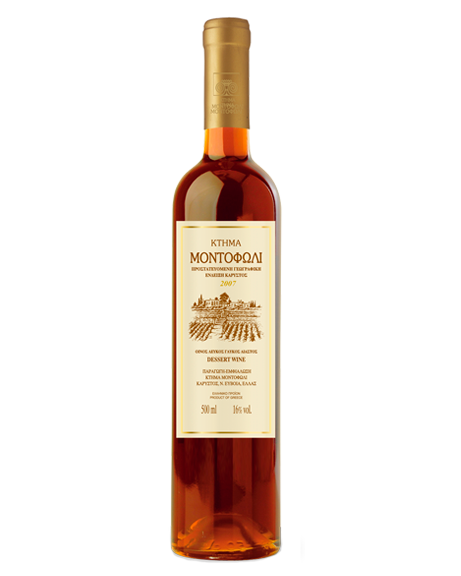 In the palate it’s thick and rich, with a strong raisin taste and notes of vanilla, chocolate and coffee.

In the palate it’s thick and rich, with a strong raisin taste and notes of vanilla, chocolate and coffee. 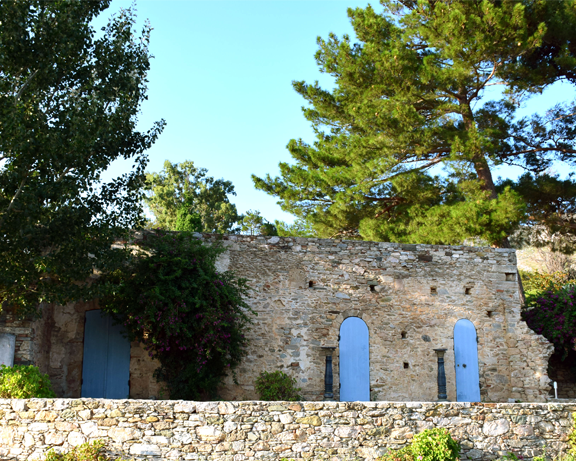 Montofoli Estate is a remarkable landmark of South Evia. Franks, Ottomans and Kings have given this piece of land its exceptional energy. The Estate has a panoramic view to the sea and a very rich land, both of which have made it a point of reference throughout the long history of Karystos.

During the Turkish occupation, Omer Bey, who later became the Pasha of Evia, was the owner of the Estate. It was then called “The Pasha’s Gardens.”

Following the liberation of the island around 1835 the property was purchased by Ioannis Paparrigopoulos, Vice-Consul of Russia in Karystos and Chamberlain under King George the 1st of Greece.

In 1877, his son Michalis Paparrigopoulos, sold the property to Ioannis Konstantinides, a merchant from Alexandria, Egypt. Konstantinides preserved it in a perfect condition, cultivating oranges, tangerines and lemons. The estate was mentioned in numerous tourist guides as “Ktima Konstantinides.”

As a landmark of the area throughout its history, Montofoli has hosted important personalities. King Otto of Greece was received here during his visit to Karystos in 1841, for the purpose of donating the plan of today’s Karystos City. In October 1953, at the inauguration of the water supply project of the City, King Paul of Greece received hospitality at the Estate.

In 1962, after numerous excavations the estate was declared an archaeological site.  The findings are displayed in the Archeological Museum of Karystos, housed in the Yokallion Institute in downtown Karystos.

Through Montofoli runs an old staircase, built from the remains of ancient buildings of the region. Its 157 steps are said to have served as a ‘Road’ leading to an important spot, unknown today.

The buildings of the property were built in different periods. The Main House with the three arched windows was built during the Frankish period (1500 AD) and the left part was added later on, during the Turkish era. The Dovecot (1870) is thought to be standing on the ruins of a Roman Bath and the Red House is a neoclassical building representative of the late 19th century.

The Wine Cellar is built on the ruins of the Christian church of St Marcus. During the Turkish occupation the temple was destroyed and converted into a stable for horses. Today it serves as a wine cellar that houses the “Montofoli Estate” wine, stored in barrels & bottles.

Montofoli was abandoned around 1950 and turned into ruins hence.

In 1986 the property was bought by the family of Pavlos G. Karacostas, and MONTOFOLI ESTATE S.A. was formed in order to restore the property and exploit it agriculturally. It was then named after the hill of “Montofoli,” on which it lies.